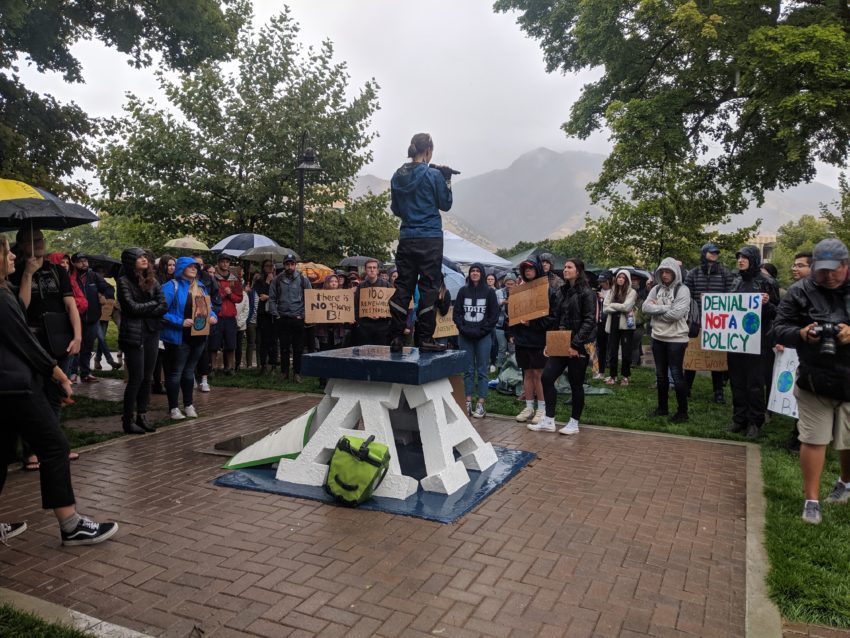 Friday, September 20, was a historic day as over four million people took part in a worldwide protest against climate change.

Protests took place on the Utah State University campus, as more than a hundred people gathered around the USU quad to speak out about their concern about the policies and practices that are fueling climate change.

Despite the rain and cold weather, protestors – ranging from children to adults, students to residents – came together to stand up for what they believe in: a renewed effort to reduce carbon emissions and serious global discussion and planning to address climate change.

Diana Perez, a first-year doctoral student in USU’s behavioral analysis program, was one of those who took part in Friday’s events.

“The protest had a lot of driven individuals fighting for the world they love,” said Perez. “ Speeches were given to help spark change and build unity amongst the activists.”

The worldwide protests that took place on Friday came about largely as a result of an increased push from Swedish teen activist, Greta Thunberg, to reduce our carbon footprint. Though an exact number of protestors that participated on Friday has not been released yet, it’s clear that millions of individuals who turned out were inspired by Thunberg’s words and actions.

A key component to this new climate change movement is the diversity of those participating, specifically in the number of young people who are involved. Young people care and are passionate about this issue. They want the other generations to take this matter seriously and commit to make changes to address climate change.

When asked about the role that younger generations (specifically students) have in bringing about change, Perez said: “The role students play as future leaders of the working class is to make others listen, to change their own behavior, and to influence policymakers to do what is best for the ecosystem.”

Today at the United Nations’ Climate Action Summit we find out how serious the matter of climate change will be taken by global policymakers. For now, individuals can continue to use their voices, and let their concerns be heard.

Perez, for one, will continue speaking out.

“Use social media to bring attention to events such as the Climate Strike” she said. “Call your politicians and make sure they stick to the green policies they advocated for during their election campaigns.”

For more information on future protests go to:

A new class hit the catalog this semester, RAM 170

As leaves begin to change, adventures in the mount