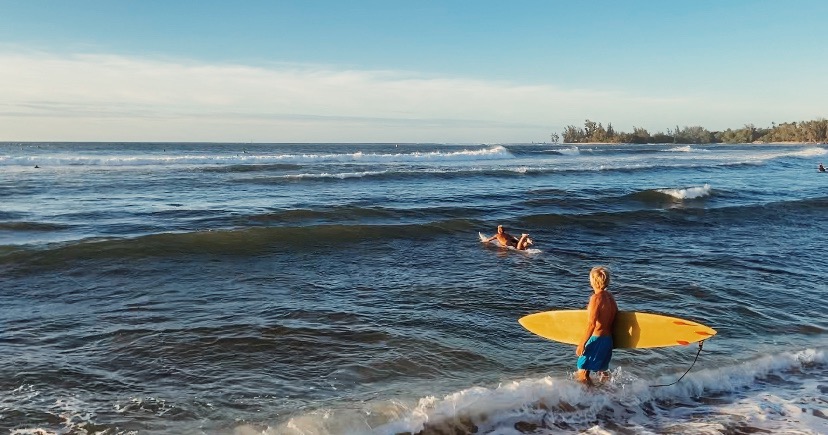 With a global pandemic in full force, it would make sense to feel trapped. Nothing seems to be normal anymore. But is that a bad thing? Instead of getting down in the dumps, a few brave souls decided to turn this situation into an opportunity of a lifetime. In an interview with USU student Jennifer Lane, she said “Moving to the Island of Hawaii has been the best decision I’ve ever made. It’s been full of self-discovery, seeing new people, places, and cultures, and exploring the world in a way that I’ve never experienced before.” With the news of online schooling due to the Corona Virus, Lane decided that this was the perfect opportunity to move somewhere amazing. Lane wasn’t alone in this thought. Many other students had this same idea, which led to the community in Laie on the island of Oahu, Hawaii.

Sitting on the North Shore of Oahu, Laie has some of the most breathtaking beaches on the Island. It’s home to 6,138 locals who spend their days surfing, spearfishing and eating jumbo garlic shrimp. Driving down the streets is an adventure due to the unreal views. The ocean to left and the beautiful, luscious, green mountains to the right. The North Shore is famous for dolphin sight-seeing in the summer and big wave competitions in the winter.

After the announcement was made that businesses were shutting down and travel was restricted, Laie became a ghost town. It went from being full of excited tourists to minimal people on the streets and beaches. That didn’t stop Lane from making the voyage to Laie. Lane said, “I knew that there would be restrictions in place, but this is a unique opportunity that I couldn’t pass up. At what other point in my life would I be able to do something like this?”

As a student living in Hawaii, the typical day consists of beautiful sunsets and sunrises, last-minute surf sessions, and hikes galore (and homework, can’t forget about that).

When life gives you online school, move to a beautiful place. It will be a risk worth taking.

A student at BYU-Hawaii said, “My life motto in Hawaii is work hard, play hard. I can work on my homework, go jump in the ocean, then get right back to it.”

“You wake up every day asking yourself, ‘is this a dream?’ says Lane.

Laie is a community where everybody has a sense of respect for nature. Surfers often talk about the humbling effect that the ocean has on them. With waves 30 feet above your head, it’s impossible to not feel small yet exhilarated with the idea that you might catch it. Jason, a surfer activist, has surfed in almost every body of water that is surfable; from the bottom of California all the way up the coast. He currently lives in Laie and goes out daily to see which waves he can catch. Jason said, “Catching a big wave is like seeing unicorns and rainbows. It’s a feeling that is hard to describe. It’s just you, God, and the water.”

The world might be in disarray, but that doesn’t mean that we will stop seeking a new place to visit, new faces to see, and new bodies of water to jump into. Life is too short to not take risks, to not do something you’ve wanted to always try. Now is a perfect time. When life gives you online school, move to a beautiful place. It will be a risk worth taking.

A new class hit the catalog this semester, RAM 170

As leaves begin to change, adventures in the mount