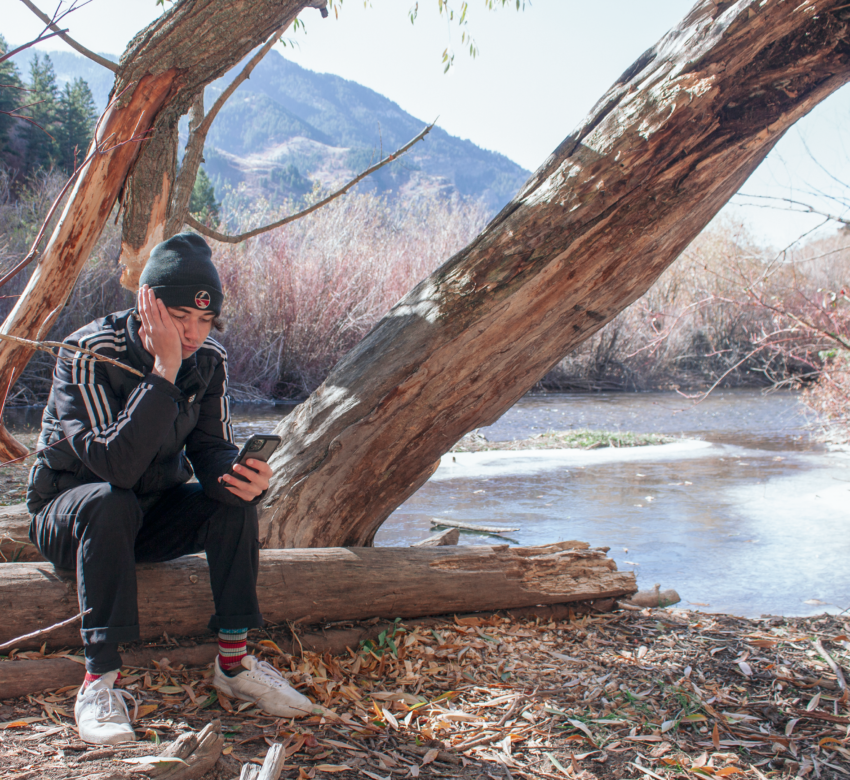 Lyrics and internal dialogue bounce around my head while trail-running. Often, I’m flipping a switch between thoughts of, “I really don’t know why I do this. Half the time it hurts,” and purely focusing on the occasional mood-decisive beat and song. Swirls of color drift from white-barked giants, and for a reason that often eludes me, aggressively colored sneakers carry me down familiar worn dirt. My pace is slower than usual, but I decide to blatantly ignore my aching joints, chugging along with my breath completely out of sync. Yet, like a familiar friend, enjoyment still kept pace with me. Shortening stride, striking on my toes, and leaning to the left, I almost run directly into a couple taking a photo. Quickly, I side-step.

“People need to put their phones away and just enjoy the space,” my head barks.

“You do the same thing don’t kid yourself.”

Examining the thought, Todd Snider begins to ramble and sing about how nobody believed we would ever have cable TV, and I continue down the trail flustered with myself more than other people.

It’s true. I do take pictures often while I’m outside. It’s not just the occasional photo though. It is often this underlying urge prying at me to post what I’m doing, where I’m at, and who I’m with. Stumbling down social media rabbit holes and spending nights lit by a blue-light is so common now that I would be embarrassed to share my screen time with anyone, especially with online schooling. However, it’s not just me with this problem. A whole generation of people are nomophobics, which is the term coined to describe cell phone addiction. There is even a Netflix documentary, the Social Dilemma, about the topic now, so it must be important. The naked truth is screens dominate modern civilization, and the plain fact that they have even leached onto outdoor recreation and the environment seems unharmonious.

For instance, open Instagram, click the plus, pick the really cool picture of that (insert natural scenery), edit it, write a caption, tag some friends, and then add a location if desired. That aforementioned adding a location is known as geotagging. The act of letting others know your location seems harmless and quite trivial, but organizations like Leave No Trace encourage recreators to, “Think Before You Geotag.” Geotagging can lead to rampantly increased foot traffic due to popularity, and with increased foot traffic trash often follows. The unintentional destruction of natural and historical sites is ironic because it comes from initial goodness and appreciation. With a total of 327.52 million people visiting sites managed by the National Park Service in 2019, it is ultimately the responsibility of media users to understand the impact just a picture can cause on a space (Statista). A picture can say a thousand words, but a tree can’t say any.

Social media isn’t all doom and gloom, but it’s apparent that it has cut the environment with a double-edged sword. Sometimes the saturation of beautiful views and landscapes on a media feed can lead to desensitization, especially when an i-whatever is blocking the human eye from the exact view it is capturing. At the same time, trails will disappear if they are not used.

We have all been dealt a bad hand in regards to social interaction. In 2020 especially. It’s up to us to turn the tides. Thank goodness we can already ride the incoming wave. There are current advocates for environmental stewardship and responsibility, taking full advantage of the tool social media was intended to be. Adventure Bag Crew is one of these accounts. The page encourages its followers to pack out a bag of trash on their next adventure, and they often repost the participants on their feeds: like a green thumb domino effect of inspiration.

Social media users like @akunahikes and @urbanclimbr are fighting for desperately needed racial equality and inclusivity in the outdoor recreation world. They utilize photography and live streams to educate and encourage others to overcome their fears. And, accounts like City Surf Project are providing San Francisco children with equal ocean access and surfing instruction.

So, it’s not all bad. Social media has caused a direct positive influence on the fight against climate change. It has inspired wanderlust to the point of enormous respect for our great public lands and environment. Personally, some of my favorite passions were directly influenced by internet media back when I was a high schooler in Indiana watching 180 Degrees South for the millionth time.

At the end of the day, that moment of realization before swipe, click, and camera is necessary. Why are you actually outside? Why do you actively participate in these sports? Why does the photograph never look as good as the moment? If no answer comes to mind the phone should maybe stay in the car. Take every time spent in the great outdoors with these thoughts of some yogi, “view every moment as if you are seeing it in the crystal clear reflection of water: brand new, fresh, and awe-inspiring.”