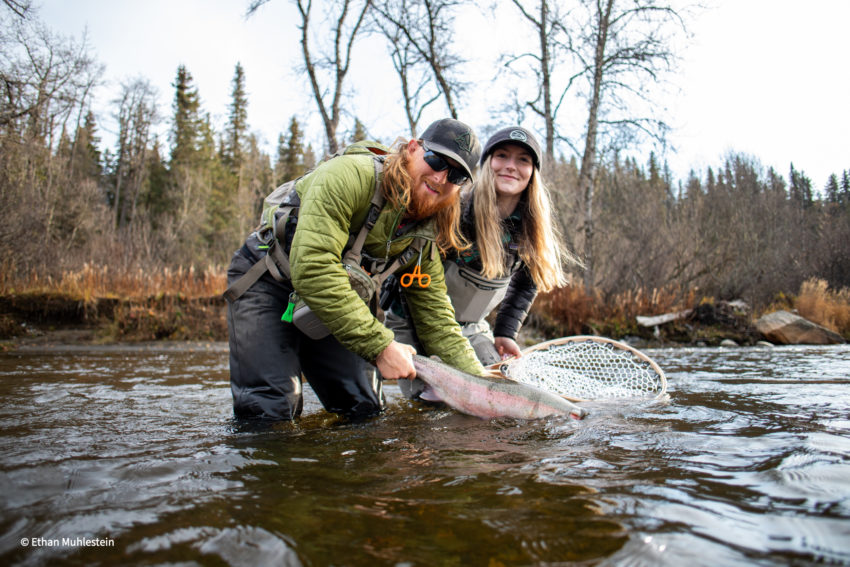 Fall is in the air; leaves fall to the ground only to be crunched by boots quickly walking to the river. Old man winter is showing his presence from the ice buildup on the back eddies of the river’s edges. Fingertips are numb yet everyone is filled with excitement. The first section of the river has deep pools and good riffles creating the perfect place to swing a fly or drift a bead for an elusive fish. Oncorhynchus Mykiss or more widely known as Steelhead are rainbow trout who undertake a lifestyle of migration from freshwater rivers and creeks to the ocean where food is plentiful.

Every year, from the fall through the early reaches of winter, Steelhead are drawn back to the spawning grounds where they once hatched as an egg. Steelhead can be found in most rivers on the west side of the United States from the high mountains of central Idaho, the temperate rainforests of Washington State, to the mighty wilderness of Alaska.

Alaska is home to premier fishing for Salmon, Halibut, and Steelhead. The Steelhead of Alaska is feisty and eager to take a fly or bead. A bead is an egg imitation and used to aggravate Steelhead. The reason Steelhead and Salmon bite a fly or bead is due to the aggressive nature these fish acquire while spawning. The bead or fly is perfectly placed in front of the fish and an angler can only hope the fish is angry enough to bite. Hooking a steelhead takes time and is challenging because of the requirements a fly or bead must-have, yet the presentation of flies and beads is not the only challenge for catching a steelhead.

As time goes on, more and more fish populations in Alaska are diminishing. The reason? Ocean conditions, spawning habitat, human-made barriers, and angling pressure. Specifically, in South East Alaska, angling pressure and handling of Steelhead by anglers plight the fish. As salmon fishing ends for residents and tourists, anglers look for a new adventure. In southeast Alaska, the Steelhead is the adventure. Rivers which no one knew about five years ago have become overcrowded and overfished.

Local anglers of the area, Clayton and Sierra gave an inside look on the growing pressure and mishandling of fish, “Over the past 5 years Steelheading has changed a bunch, lots more people than there used to be and less fish. The biggest problem with steelhead conservation is the mishandling of fish by anglers letting the fish bonk their heads on the rocks, wiping the protective slime off the steelhead, and holding the fish out of the water for too long. 5 years ago our average day of fishing was landing 5-7 steelhead. This season has been about 2. The biggest thing I would change is to put in place a hook size regulation like no bigger than a size 2 hook. I personally use a size 4.”

The loss of Steelhead is a major problem not only for Alaska but for all rivers in which you can find these prized species. Steelhead around the world are suffering and it mostly has to do with human-caused errors. Idaho’s famed steelhead make a 900-mile journey to the ocean and another 900 miles back to the high mountains. These Steelheads are facing extinction due to dams, high water temperatures, and flow rates leaving the Salmon River, Snake River, and Columbia river drainages. To learn more about steelhead conservation, visit the Wild Steelhead Coalition website and read about the problems facing steelhead all around the west coast and Alaska.